return to NHS Main Page
return to the History Room

"A Short History of Nunda" was written in 2001 by Joan Schumaker, a life long Nunda resident. It is used with permission of the author.

The Town of Nunda, a 24 by 12-mile tract of land within the Morris Reserve, was founded in 1808 as a part of Allegany County, located in the southern tier of Western New York. The name is from Nunda-wa-ono, a Seneca Indian tribe that once lived in the beautiful hills and valleys along the Genesee river and Keshequa stream within the Township of Nunda. In the Seneca language, "Nunda" relates to hills and a popular translation is "Where the valley meets the hills". Dr. Arthur C. Parker, in "History of the Genesee Country", describes this region as follows: " in all the world there is not a place like unto it for human habitation." Nunda residents and visitors continue to experience a thrill upon viewing the pastoral scenery of the Nunda valley from one of the surrounding hills.

By 1829 the original Nunda Township had been reduced to its present size, of approximately 6 by 6 miles, no longer including the Genesee River with the impressive gorge and water falls that are now part of Letchworth State Park. In 1808, only three pioneer families lived in what is now the Town of Nunda. By 1830 the population had increased to 1, 291 and by 1840 there were 2,636 residents. The population peaked at nearly 4,000 with the building of the Genesee Valley Canal in the 1840's, but had fallen to less than 3,000 by the early 1880's. It is interesting to note that the 1990 census shows a population of 2,931.

The Village of Nunda Valley, later to be shortened to Nunda, was first planned by Charles H Carroll in 1824 but was not incorporated until 1839. Four Seneca camps or small villages were once located within the Village of Nunda. These Seneca villages consisted of log structures not unlike those of early pioneers of this region. In 1790 two small villages could be found opposite each other on the Chautauqua Hollow Trail which became State Street. Until 1813 a third Seneca village was along the creek behind the Keshequa High School. The fourth village was located west of Buffalo and Gibbs Streets until 1818. Nunda's village square, once a frog pond, is at the intersection of the Chautauqua Hollow Trail and the Keshequa Trail which follows the path of the Genesee River when it flowed through this valley. Within the Village of Nunda the Keshequa Trail became East Street. 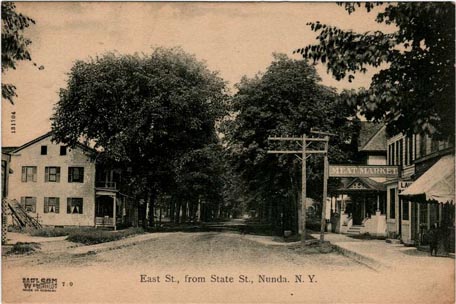 The first post office was established in the village in 1831. The main business district, consisting of a village square bordered by two-part commercial blocks, known as "Merchants Row" and the "Farmers' Exchange", was built between 1831 and 1834. These commercial blocks are still in use today. With completion of the Genesee Valley Canal from Rochester to Mt. Morris in 1841 and good roads for transport between Mt. Morris and Nunda, the Village quickly grew from a pioneer settlement to a community of fine houses, several churches, hotels, all kinds of commercial establishments, factories, a bank, a newspaper, an academy, and numerous social organizations such as the debating societies of the Nunda Literary Institute. Due to politics and construction delays the canal did not reach Nunda until 1851 and was not completed until 1861. 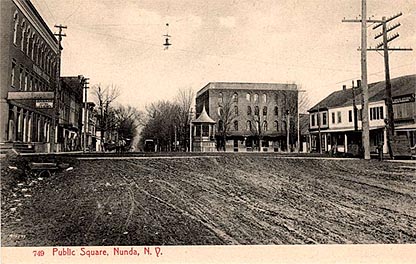 The Genesee Valley Canal connected the Erie Canal in Rochester with the Allegheny River south of Olean, a distance of over 100 miles. It was 42 feet wide at the water surface, 26 feet wide at the bottom and four feet deep with 7-foot banks (3 feet above the waterline). A total of 112 lift locks with an average lift of 10 feet were needed to traverse the nearly 1000 foot elevation change from Rochester to the summit at 1488 feet above sea level and to descend to the Allegheny River. The GVC has the highest canal elevation in the world. These locks were 90 feet from gate to gate and three were located within the Village.

The remains of Lock 42 is just west of State Street (Route 408) at the northern entrance to the village across from Vermont Street. The canal passed behind the many business that lined State Street, continued at an angle to West Street, passed under a bridge at Fourth Street and through a lock before reaching another bridge at Second Street, passed west of the Village parking lot and under a bridge at the end of First Street where the third lock was located, and turned west when it reached Portage Street (Route 436). Fifteen additional locks were required to reach Oakland, about a mile west of the village. Lock 42, a canal warehouse, and several stately mansions built overlooking the Canal at the end of West Street are the only remaining evidence of the canal within the Village.

"The old canal was beautiful and romantic. It had fresh green banks, clear water
and interesting locks. The white barges, most often laden with newly sawed lumber, were
towed by mules wearing bells around their necks and red or blue tassels in their ears."
----- Reminiscences of Mrs. M. M. Wilner, 1852.

The Genesee Valley Canal operated only until 1878, but during this time, fortunes were made as it carried away the forests of Livingston and Allegany counties and the grains produced on the fertile farmlands. Cheap transportation for merchandise, groceries, and other freight from New York City, Syracuse and Rochester also added to the prosperity of the village during this time.

One of the reasons contributing to the demise of the Genesee Valley Canal, was the introduction of railroads into the area in the early 1850's. Nunda Station, about three miles south of the village, was the Nunda station for the Erie Railroad. The first train arrived in January 1852 and by 1853 this branch of the Erie was open from Buffalo to Hornellsville, a distance of 91 miles. Beginning in 1874, the Rochester, Nunda and Pennsylvania Railroad, known locally as the "Swains Branch", provided service through the village for only a few years. In 1882, the Village of Nunda finally obtained rail service, when the Genesee Valley Canal Railroad (later the Pennsylvania Railroad) was built along the line of the canal. The main rail line was built north of the village to avoid the steep grade between Nunda and Oakland and service was provided to the village on a branch line originating at Nunda Junction, about two miles northeast of the village. The depot, originally located at West Nunda, was moved to the corner of West and Second Streets in 1896.

Nunda Station, later known as Dalton, quickly became a thriving community with its own warehouses, post office, stores, blacksmith shops, mills, hotels, bank, church, school, produce merchants, livestock dealers, and medical doctors. Other hamlets in the Nunda Township never enjoyed the growth and prosperity that the railroad brought to Dalton. These communities were located at: Wilcox Corners (now known as Guy's Corners) on the old State Road between Nunda and Dalton; Sweetcake Hollow and Barkertown in the eastern part of the town on East Hill; and Coopersville off of Creek Road northeast of the village. 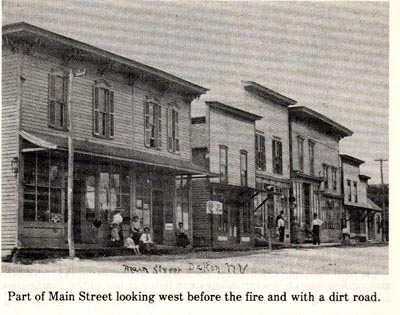 Without the canal and a major railroad, economic growth and prosperity for the Village of Nunda was at a standstill in the early 1880's. In spring 1882 Chauncey K. Sanders, editor of The Nunda News, and four other enterprising and forward thinking professional and businessmen formed what they called the "Association" and pooled their resources to build what would become the newest and fanciest business block in Livingston County. They purchased the former Holmes Hall lot, a prominent site on the corner of State and Second Streets, and hired Henry B. Gleason, a Rochester architect, to design their new building. Mr. Gleason designed a highly ornamented, but most functional, two-part commercial five-bay block building typical of the late 1800's. In April 1883, this massive commercial block was ready and the rural Village of Nunda now possessed an architecturally unique and most sophisticated structure that would come to be known as The Union Block.

The Union Block soon attracted much attention and trade from the Nunda region and continued to serve as Nunda's main commercial building for almost 100 years. The Nunda Post Office was located here for 66 years, a grocery store was housed here for 90 years, and a dry goods/department store for 85. Numerous other merchants and professionals thrived in this location over the years, making substantial contributions to all aspects of life in this rural community. Locally the Union Block is best known as the home of The Nunda News, one of the longest continuously published (1859 - 1982) and most successful weekly newspapers in the country. Chauncey K. Sanders, founder of the paper and one of the builders of the Union Block, started printing the paper here in 1883. While the presses stopped in the 1970's, offices for The Nunda News remained here until 1982, a few months short of 100 years. Nunda residents and many former residents living in distant places appreciated and depended upon this quality newspaper to learn about local events and provide an invaluable record of the history of the Nunda area.

Manufacturing in Nunda started with a cabinet factory on South State Street built by Henry C. Jones who arrived in about 1820. This became part of the Nunda Casket Works that was in continuous operation for more than a century, closing in 1979. Nunda's most famous industry was the Foote Manufacturing Company, founded in 1903 by Charles E. and Chester T. Foote. Their original 1903 plant, located on North State Street, was replaced by a large modern brick structure in 1913 and produced power concrete mixers that were being shipped across the country and sold oversees by 1918. Their mixer was recognized at the San Francisco Exposition in 1913 and in 1926 The Foote Company received the American Institute's gold medal, the first award ever made for road equipment. Continued improvements to their self propelled mixer-paver led to international recognition during World War II when their Multi-Foote 34E mixer was used to build runways wherever allied forces were located. The War Department recognized the Foote Company's war efforts in 1943 when the company and its employees received the first of three "E" awards, a joint Army/Navy Production Award. The Foote Company was purchased by Blaw Knox in 1948 but the Nunda plant was closed in 1955 with the business being moved to Mattoon Illinois.

The Nunda Casket Works building has been demolished and replaced with buildings occupied by a restaurant, post office, professional offices and other businesses. The Foote Company plant was home to a number of businesses and left vacant for a few years. The plant has undergone some renovation, including a slight reduction in size, and is currently the home of Seating, Inc. which specializes in the manufacture of chairs.

The southern portion of the Union block was facing demolition in 1998 but is currently undergoing renovation. In 1999 the Union Block was placed on the State and National Register of Historic Places and is the first building in the Town of Nunda to receive this recognition.

Dalton's main business district was mostly destroyed by fire in 1943. Over the years other businesses closed and a recent fire destroyed the post office and a restaurant. The restaurant has been rebuilt and a new post office is under construction. Trains still pass through Dalton but they are now part of the Norfolk-Southern Railroad.

The historic transportation corridor which was once the Genesee Valley Canal and later the Pennsylvania Railroad is now being transformed by the State of New York into the Genesee Valley Greenway, a 90-mile multi-use trail. Canal boats and trains are being replaced by hikers, bicyclists, skiers, equestrians and snowmobiles who will access the Village of Nunda by using the branch trail from Nunda Junction.

Numerous Genesee Valley Canal locks west of Oakland have been preserved and are now part of Letchworth State Park. The canal and railroad history is interpreted with a series of beautiful signs that begin at Oakland and follow Trail #7 and the Genesee Valley Greenway.